Occasionally, parallels can be found between wine and people. Just as when the more reserved amongst us are sometimes the ones who have more interesting things to say, when a wine makes claims to be modest, in fact it excels. Such is the case with Tentenublo Xérico, a village wine that arose from the notion of paying tribute to Viñaspre people and which has become a genuine revelation.

The label pays homage to Vicenta, the mother of Roberto Olivan, a young winemaker and owner of the family winery. The picture on the bottle illustrates to perfection the kind of wine we'll find inside: a wine like those of times gone by, which smells of the winery and harvest. The Tempranillo and Viura (20%) grapes with which it's made come from three different parcels, planted with bush vines on the slopes of Viñaspre's chalky loam slopes, effectively adding pleasantness and complexity overall. The grapes are only partially destalked and because of the combination of these stems with the concrete and chestnut foudres used in its ageing there's the growing sensation of a classic wine.

After the recommended decantation, a fresh, crisp wine emerges, boisterous and lively. The red fruit, the lactic and spicy notes dominate the attack, but soon fine hints of smoke and wood appear, accompanied by aromas of times past, of bread toasted over hot coals, of stone dust, of a village wine, just as the label says. On the palate it's juicy and has good acidity with a balsamic background of laurel, liquorice and black olives. It has that rusticity of honest wines, the sort that speaks of a particular land. 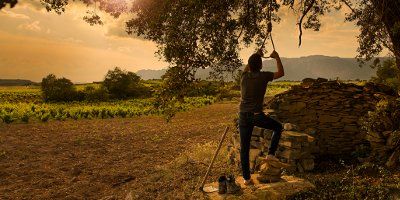 Winegrower and oenologist Roberto Oliván always follows his own vision and makes sure his wines do not tailor to one specific style. Perhaps that is why the Wine Advocate taster Luis Gutiérrez calls him one of the leaders of the new Rioja revolution, or the Master of Wine Tim Atkin named him Young Winemaker of the Year in 2015. Based in the small village of Viñaspre in northern Spain, Roberto produces terroir wines in a traditional hand-crafted way which express the strong...