R. López de Heredia (Viña Tondonia) is one of the names which inspires most respect and admiration with regard to wineries producing "fine wine". It is, moreover, the oldest winery in the...

R. López de Heredia (Viña Tondonia) is one of the names which inspires most respect and admiration with regard to wineries producing "fine wine". It is, moreover, the oldest winery in the emblematic town of Haro and one of the first three set up in La Rioja.

Founded by D. Rafael López de Heredia y Landeta at the end of the 19th Century, R. López de Heredia is still today a winery owned by one family, and the four generations who have managed it have stayed faithful to the philosophy and fundamental principles relating to work and social ethics established by its founder.

Around 1877, and as a result of concerns arising from mid-century onwards over the arrival of French wine merchants, Don Rafael López de Heredia y Landeta decided to follow their lead. He began to make plans and construct what is now the winery.

Between the years 1913 and 1914, Don Rafael planted Viña Tondonia, as well as continuing with the construction of the winery. Nowadays, the building has 3,433 square metres of underground cellars, with galleries up to 200 metres in length, down to a depth of over 10 metres, bored right into a colossal block of sandstone, and all along the sides extend endless rows of barrels (12,900).

From 1913 to 1914, Don Rafael carried out the planting of Viña Tondonia, a beautiful vineyard of more than 100 hectares, located on the right bank of the River Ebro, which would give rise to the winery’s most famous product. Viña Tondonia is one of Haro’s most spectacular, embraced by the River Ebro and with its landscape consisting of alluvium, limestone and black poplar trees.

López de Heredia also possesses three other vineyards, likewise embedded within the Rioja Alta region —benefitting from its microclimate clearly influenced by the Atlantic— and named Viña Cubillo, Viña Bosconia and Viña Zaconia. These plantations have been created to give them suitable dimensions, for ensuring quality originates directly from the vines, the cornerstone for the prestige of López de Heredia wines.

The vineyards cover 170 hectares, with an average annual yield of about 800,000 kilos of grapes, which are all destined for the production of its own highest quality wines, including the Gran Reservas, when truly exceptional vintages occur, as was the case in 1976 and 1883.

Harvesting is carried out in October, recreating scenes from back at the start of the 20th Century. The grapes are gathered by hand and placed in containers made of black poplar wood, manufactured in their own workshop and with a capacity of up to one hundred kilos. These fine containers, solely used by López de Heredia throughout the DOC for transporting the grapes from the vineyard to the press, commence a long-standing relationship between grape and wood which is set to continue with the ageing of the wine in oak casks.

The black poplar crates turn out their contents into the weighing hoppers and from there, the fruit is moved on to the crusher-stemmers, which gently break open the berries so as to extract the juice, enabling immediate contact with the wild yeasts on the bloom of the grapes.

Red wines ferment leaving grape skins on, whereas the must of white wines ferments without them. As regards rosés, they undergo a mixed production process, letting the must macerate with the skins for a time, so that it absorbs colour, but removing it before the start of fermentation. The must ferments in large oak vats; the largest, with a capacity of 240 hectolitres, are destined for red wine and the smaller, holding 60 hectolitres, are for white wine. The turbulent fermentation usually lasts for about seven days, after which the drawing off takes place. The wine-grape juice will slowly finish fermenting (for 5 or 6 months) in Bordeaux-type oak casks.

Ageing begins when the wines, once fermented, are now ridded of the most solid matter. They are moved into American oak casks of the 225-litre Bordeaux type, in which a lengthy, gradual ageing will ensue, thanks to the cool, constant temperature of the underground cellars. During this period, periodic rackings occur (once or twice a year). Thus, proceeding with great patience, the natural elimination of whatever might be harmful to a perfect maturation continues to be achieved, in a process which lasts for at least three years, but can carry on for six or even longer in the case of Gran Reservas. Once oak ageing has reached completion, the wine commences its repose in bottle (for a minimum of 6 months), gaining in smoothness and aromatic nuances.

Gran Reservas only appear two or three times a decade, spending a long time ageing (at least seven years), after which they undergo clarification with fresh egg-white, then bottling after approximately six weeks, and this occurs directly from the barrel itself, without any filtration. A long, carefully-worked cork is applied and sealed to exclude any outside contact, such as moulds or insects, during the many years that will be spent in cellar.

Viña Tondonia is one of only two wineries nowadays that maintains its own cooperage workshop and the only one to use solely barrels which have been hand-crafted on site, with wood sourced from the Appalachian Mountains in the United States.

Many large wineries used to rely upon their own cooperage, but almost all of them have disappeared due to reasons of cost-effectiveness. López de Heredia has retained its workshop and continues to have complete control of the coopering procedure: from acquiring the wood at source to the manufacture and assembly of the barrel, as it undergoes the transitional processes of sawing, drying/curing and toasting.

Viña Cubillo, Viña Bosconia Reserva and Gravonia Blanco are the first reference points of Bodegas R. López de Heredia, three estate wines which would be the ones undergoing maximum ageing (3-5 years) elsewhere, whereas at this Haro winery they are merely the first tier. 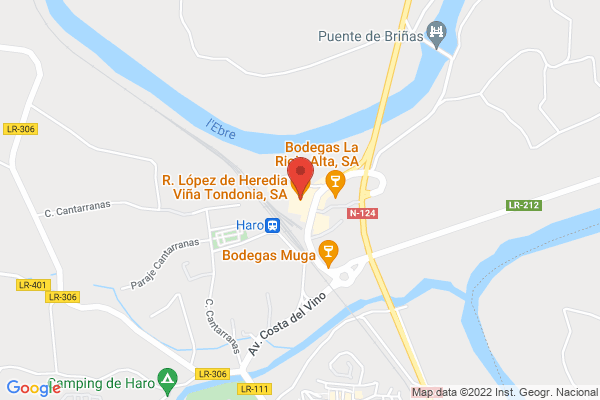