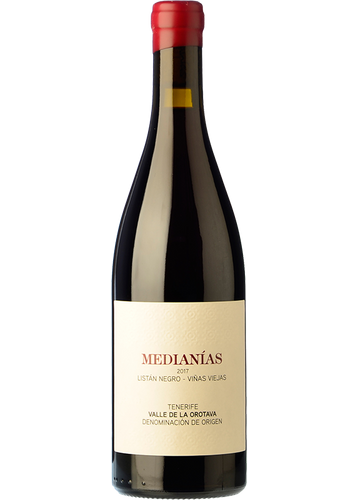 Medianías is the name given to the area in the Orotava Valley comprised of land lying at an altitude of around 600 metres. There, young and century-old vines of indigenous varieties sink their roots into the island of Tenerife's volcanic soils: Listán Negro, Vijariego Negro and Tintilla are distributed among trellises and braided cordons. The 'trenzado' is a trellis system which consists of braiding the vine's branches together and fascinates all viticulture enthusiasts; despite assuring good yields, it requires many hours of hard work; nevertheless, at Suertes del Marqués they remain totally convinced that tradition is a fundamental pillar of their work philosophy.

All vineyard tasks are carried out manually and following organic principles; diseases are only treated with natural products, with as little synthetic interference as possible. Once in the winery, the wine ferments through native yeasts and racking is limited to the essential minimum. The wines ferment and mature in concrete vats and old barrels, which don't have an effect on the wine. Filtration processes aren't employed and a small amount of sulphur is used only at bottling time.

After an entire process when the grape has been the absolute protagonist, the Medianías comes over as an honest Atlantic red which conveys us to its original landscape with every sip. After appearing a low-density, lovely ruby colour, aromas of volcanic earth and ash emerge, as well as wild meadows and red fruit. On the palate it's silky and fresh, with smokiness enveloping the lively, acidic fruit that's reminiscent of Morello cherries, with glimmers of eucalyptus, cloves and white pepper in the background. Intense and delicate at the same time, it flows like lava, and refreshes like the wind.

I'm a bit biased as I love the wines from Bodega Soagranorte. This was part of a 'Tenerife tasting' and was definitely one of the best wines of the day. The trick was to let it breathe. It was a different wine after a few hours.

Bodega Soagranorte lies in 9 hectares of vineyards, situated on the island of Tenerife and right in the middle of La Orotava (Las Suertes), a famous wine-growing area. The estate extends over lands that vary in altitude from 350 to almost 700 metres above sea level.The majority of the vineyard site is taken up with centuries-old vines of the Listán Negro and Blanc grape varieties, grown on a multiple cordon system; in the rest of the vineyard there is a mixture of both young...