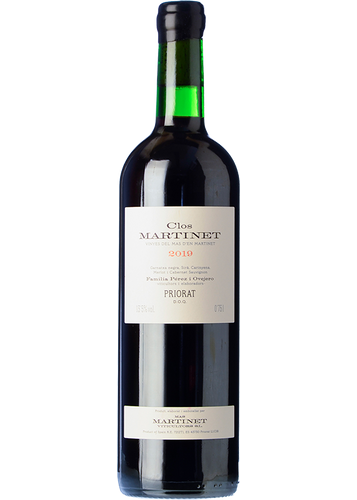 Clos Martinet is one of the best and most representative wines in Priorat, a wine which is always top-quality, year after year. Although its style has evolved naturally over the years, as the running of the winery has passed on from father to daughter, from Josep Lluís Pérez to Sara Pérez, their constant hard work and rigour ensure that its quality is instantly recognizable: one of the great Priorat wines, elegant and full of life with a sophisticated nose and exquisite minerality.

Clos Martinet is a celebrated wine, a wine that talks to us of its history and origins, a wine which has ignored trends and refused to relinquish the small amounts of international varieties in its blend. Grapes such as Cabernet Sauvignon played an important role in the origins of this wine, and continue to form part of its identity today.

It has the acidity and body to promise it a long future, as can be seen by the fact that previous Clos Martinet vintages are always to be found among lists of the most sought-after wines in Spain. Harmony and expressiveness, power and elegance, a new Priorat whose roots draw from history but avoid excesses. A wine that can skillfully move between maturity and tension, rusticity and sharpness, complexity and transparency. A seductive wine that you are sure to fall in love with.

Very good wine but for the price and reviews was hoping for something slightly better. Buy very nice

Although there was no tradition of winemaking in past generations, Josep Lluís Pérez and his family (Pérez Ovejero) established themselves in the Priorat in 1981 and, along with René Barbier senior, Carles Pastrana (Costers del Siurana), Dafne Glorian (Clos i Terrasses) and (Álvaro Palacios), one of the Priorat’s leading experts, they are held responsible for having brought revolutionary changes to this small denomination in Tarragona, now much admired all over the world. Since...