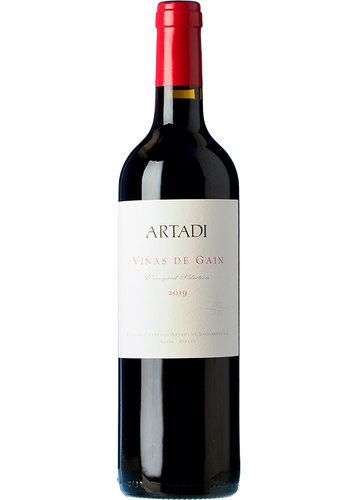 Viñas de Gain is one of the best choices for making a start on the Artadi catalogue. A wine with a clean and elegant profile, refreshing, which we could immediately conjure up a picture of in two words, cherries and eucalyptus, yet it contains much more: the identity of a terroir spread out over the three towns of Laguardia, Elvillar de Álava and Leza, and the character of the Tempranillo vineyards with ages ranging between twenty and thirty years old, lying on calcareous-clay soils at an altitude of 450 to 700 m, cultivated with the utmost respect for the environment, by means of organic viticulture. For ageing Viñas de Gain, Artadi uses French barrels previously filled with one or two wines, and not new barrels.

Viñas de Gain is also the most approachable Artadi wine, a youngster full of life, rich in refreshing red fruit aromas, encased as always in impeccable ageing, and elegant like all in this great family. Its approachability and pleasantness will amaze you from the moment the bottle is opened, but do let it breathe a while and you'll enjoy it all the more: cherries, plums and redcurrants, eucalyptus leaves, liquorice stick, coffee beans, damp earth. On the palate it's flavoursome, very supple, easy to drink, elegant and very harmonious. Powerful, enjoyable and with a delightful evolution. Should anyone be left questioning whether this is or isn't a Rioja, it's undoubtedly an Artadi.

NOTE: Viñas de Gain 2014 is the last vintage to have a Rioja back label. Artadi left the Rioja QDO at the end of 2015, a decision taken with great difficulty, as they have explained whenever they have had the chance, faced with the impossibility of being able to reflect the extraordinary diversity of the Rioja terroir on the labels of their wines, and always out of a respect for all the region's vine growers and producers. Starting with the 2015, Viñas de Gain, like all the rest, is being released onto the market with the winery's label: Artadi - Álava - España, without being affiliated to any denomination. From this vintage onward, Artadi wines will have to be sought in other categories or directly by their name: Artadi.

Bodegas Artadi is, in fact, the name by which the Cosecheros Alaveses cooperative is known, a well-orchestrated project that started up in 1985, in which several vine-growing associates became involved to show that cosechero (young red) wine could also prove to be great wine. They were successful, with their cosecheros and all the other wines they have added to their catalogue. During the 1990s, under the direction of Juan Carlos López de Lacalle, the winery saw its prestige...