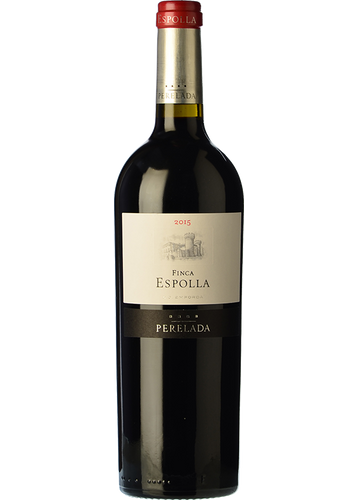 Finca Espolla is a parcel which stretches over an expanse of 21 hectares on the slopes and terraces of Les Alberes, an area very close to the Pyrenees mountains and lying within the Empordà denomination. The terrain's distinctive personality, with slatey, acidic soils characteristically black in colour, combined with the high density planting of 6,200 vines per hectare which reduces the vigour and number of grapes, enable the Perelada winery to produce a high quality single vineyard wine that has a very clearly defined identity.

Enjoying a typically Mediterranean climate in a location heavily buffeted by the Tramontana wind, the varieties grown on the Finca Espolla give rise to its namesake wine: Monastrell, Cabernet Sauvignon, Syrah and Garnacha, with the percentage varying according to the harvest.

Presented in a Bordeaux bottle, Finca Espolla is an energetic and dynamic wine, with great freshness and the marked balsamic and mineral element etched by its place of origin. On the nose it's remarkably complex, with aromas of sweet fruit, spicy notes, caramel, coffee and a subtle lactic touch... On the palate it's powerful but rounded, with plenty of sinew and good acidity that imparts freshness, persistence and expressivity. Definitely a wine with considerable character which we recommend you always decant.

Honestly one of the best Spanish wines I’ve ever had

I’ve ordered 24 bottles of this for my cellar now - this is an incredible wine for a great price. I first discovered it in Barcelona and now get it shipped to London regularly. Service from vinissimus is also great!

Amazing crowd pleaser - I buy 12 bottles at a time and have never found a wine like it on the price/quaity spectrum. Big fruity flavours but not overdone, still has a touch of class.

I frequently purchase this wine. Good flavour , body and lengthy taste. Ideal for red meat eaters ! I almost don’t like to let others know about my discovery !

I’m a regular consumer of finca espolla and have never been disappointed . Robust but with good fruit. Recommended with red meats.

The prestigious and successful Perelada winery with its wide range of excellent wines produced at the emblematic Perelada Castle is run by the business-minded Suqué Mateu family who have not merely been wise enough to make the most of the potential of Empordá, one of the oldest winemaking areas in the Iberian Peninsula, but who have also helped significantly in boosting and promoting winemaking in the region. For over 25 years Delfí Sanahuja has been the chief oenologist...