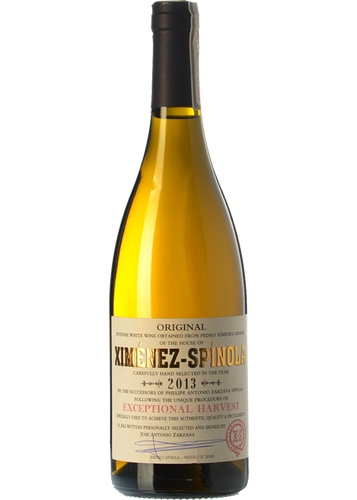 Ximénez-Spínola is without doubt a unique winery, among other reasons because it works solely with the Pedro Ximénez grape, unlike any other winery in the so-called Marco de Jerez. This use of the single varietal has earned them the achievement of a special accreditation from the Spanish government: "Denominación Varietal Pedro Ximénez de Acreditación Propia".

The Ximénez-Spínola wines are very typical of Jerez, but also very individual. They are made according to methods conceived by the actual family, different from the more usual ones employed locally, yet at the same time retaining all the magic of the Jerez 'albariza', the white chalky soil. It still continues today to be a family firm that's committed to quality and numbers each one of its bottles, showcasing the excellence contained within them.

For producing Exceptional Harvest they pick the Pedro Ximénez grapes three weeks after their optimal point of ripeness, which allows the grapes to concentrate the sugars without drying out too much. Yields are extremely poor, obtaining only 575 litres per ton of grapes, but the result fully compensates such a sacrifice.

The wine matures for four months on its lees in old American oak barrels previously used for the house's Oloroso, thereby acquiring some of its aromas and gaining elegance and complexity. It's instantly alluring with its gleaming golden colour. On the nose it becomes even more pleasurable, with quinces and flowers fusing with citrus and honeyed hints; ginger and white pepper enhance orange peel, walnuts and the sweet confectionery of childhood memories. On the palate it's glyceric, oily and fresh simultaneously, with salt and hydrocarbons shaping its liqueur profile. The sweet-acidic-salty interplay proves so enthralling that even in the final moments the bitter touches don't seem to want to lose their grip and latch on to an elegant, mineral, aromatic element that's hard to match.

It's beautifully complex: dried apricots, baked apples, honey, sage, walnut... In the background, notes of citrus, plums, marzipan. The palate is bold and greasy, with an elegant structure enlivened by an exceptional acidity. Surprisingly dry, with a long finish, masterfully balanced between sweetness and sapidity. Truly one of a kind, hard to pair. And just 12.5% abv!