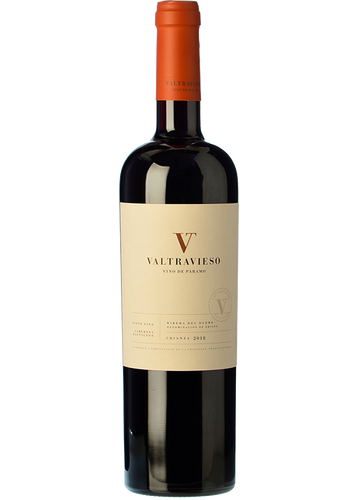 A feminine wine from the Ribera del Duero? Well, judge for yourselves. The wine world is surprising and the better you think you know it the more it amazes you. Generally from the Ribera del Duero, we had grown accustomed — until fairly recently, because trends are changing — to over-oaked wines in many cases, wines in which aromas acquired through ageing tended to dominate the whole. Here we have quite the opposite, with a wine that boasts two significant features and an important secret: it's aged in used barrels, 3 or 4 years old, all made of French oak, and the Valtravieso Crianza also has 10% of so-called foreign grapes (5% Cabernet Sauvignon and 5% Merlot). However, its best-kept secret: the height; when the average altitude of Ribera del Duero vineyards ranges between 750 and 850 metres, the Valtravieso ones are located at 920. An absolute treasure they treat with the utmost care and, justifiably, with real pride.

The wine is modest, in the sense that it's not pretentious, but it's not simple; it's refined and doesn't overwhelm. With considerable elegance, it starts off timidly and gradually ends up enticing us until there's not a drop left in either glass or bottle. Lovely, accessible, sweet, fresh... In the Valtravieso Crianza you'll discover fresh fruit and woodland aromas, predominately red fruit (redcurrants, wild strawberries, cherries, crunchy fruit and a little bit of blackberry jam) and aromas of rosemary, of scented wafts, violets... and humus too, plus an undertone of cloves and toasted bread. Melting in the mouth, it's medium-bodied with well-polished tannins. Judging by its aromas now and the varietal mix, we're just left with the feeling we'd like to taste it after a couple of years more in the bottle, to enjoy its tertiary qualities which we'd surely love. Valtravieso strives to make wines with a Ribera del Duero structure but a Rioja fineness, wines that are easier to drink and in our opinion they've achieved their objective. They've successfully produced a Ribera that's making itself extremely popular.

Valtravieso started up in 1985 on an estate called La Revilla, located in the Valladolid town of Pinel de Arriba, right in the heart of the Ribera del Duero. It was here that the first experimental grapevines were planted and the first vintage to be put on the market was the 1994, which was their Crianza. However, it wasn't until the González Beteré family acquired the property in 2002 that Valtravieso's wines really got underway. The Valtravieso philosophy is based on the...

Alexander Vs The Ham Factory 2018