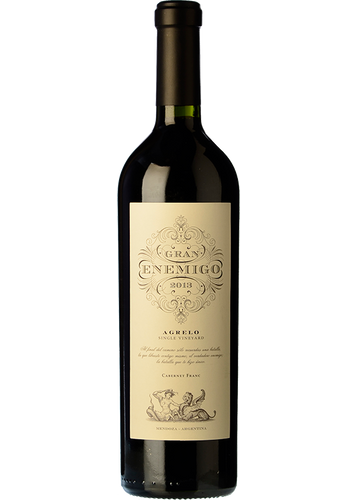 The joint efforts of Adrianna Catena (historian and passionate about the land) and Alejandro Vigil (oenologist and agricultural engineer) have given rise to a new gem from El Enemigo, the project they share, called Gran Enemigo Agrelo Single Vineyard, a red of historic character and revolutionary profile, a wine which soaks up tradition and rebels against resistance to change.

Perhaps the best Cabernet Franc made in Argentina, the Gran Enemigo Agrelo doesn't come about from an overwhelming desire to show off the varietal, but to showcase the landscape, a magical location. At an altitude of 980 metres and on originally alluvial soils, a very special microclimate leaves a conclusive mark on the soul of this mature and spicy red, in which the Malbec adds a finishing touch to the Cabernet Franc's merits.

The clay soil, which millions of years ago was covered by a lake, and a harvest spread over four sessions enable the grapes to reach perfect maturity as well as conveying a strong mineral touch to the wine. The altitude ensures freshness and the ageing brings out smoky and spicy aromas. The black fruit and rough tannins end up by rounding off a truly impressive aromatic display and mouthfeel which recall the Bordeaux wines of times past.

Argentina is sharply back in focus. It has tremendous potential and in recent years a new batch of young winemakers has been showing how much more there is to discover. The world of wine is evolving and so too in this South American country, where one of the foremost figures answers to the name of Alejandro Vigil, the 'Elvis Presley of wines', 'wine's answer to Messi' or straight to the point and literally, 'the wine beast', although he prefers to describe himself as a simple...