We are sorry for any inconvenience this may cause you and hope to see you back on our e-commerce very soon.
Reduced delivery charges over £178

This limited production wine is included in a special collection produced by the Eguren family at th...

This limited production wine is included in a special collection produced by the Eguren family at their newly constructed winery, Viñedos Sierra Cantabria. The 100% Tempranillo grapes come from a single vineyard planted in 1973, the Finca El Bosque in San Vicente de la Sonsierra. This 1.5 ha parcel lies on a gentle slope facing south-east and is sheltered from northerly winds by the Sierra de Cantabria. Organically fertilized every 2 years, the trellised vines grow in calcareous-clay soils, with plenty of gravel and surface stones.

Only perfectly ripe, healthy grape clusters are hand-selected at harvest and further sorted at the winery. After which they are destalked manually, with a careful inspection of every grape – typical of the Eguren attention to detail for the attainment of a supreme quality wine. Malolactic fermentation takes place in new French and Rumanian Bordelaise oak barrels, followed by ageing for 18 months in new oak and bottling in distinctive, old Bordelaise-style bottles.

The 2015 vintage has been characterised by a significant amount of snowfall during the winter and some very dry months in spring and summer, but with an end result of very healthy and properly ripened grapes.

The year's weather got under way with a bright winter and snow, but with temperatures normal for the region. It wasn't until the middle of March that a slight rise in the temperatures occurred and the vines started budding until the beginning of April. From then on, there began a period of mild temperatures and light rainfall which favoured a good growth of the vegetation. May brought with it an increase in temperatures up to about 30º C - 33º C and the appearance of the first flowers at the end of the month.

June followed on with high temperatures (highs of 23º C - 26º C) and once flowering had finished, there were several storms and even hail in the areas of El Bosque, the Vizcarral, La Concova and Trasugueras. By the end of the month temperatures were up around 40 degrees and continued high in July, but with cool nights which dropped to about 15º C and storms in San Vicente de la Sonsierra and in Páganos. A very hot and dry August ensued during which the onset of ripening and maturation occurred, with light rain in the middle of the month and the odd storm in the last few days. Mild temperatures and the complete absence of rain accelerated and completed the ripening process in mid-September, almost three weeks earlier than in a normal year.

The harvest took place during the last week in September of very healthy grapes that had a slightly higher alcohol content than in previous years, a good balance in acidity and optimal phenolic maturation. 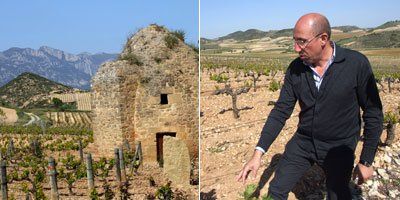 Viñedos Sierra Cantabria is essentially a collection of vineyards that the Eguren family has brought together as part of their Sierra Cantabria wine range featuring new classics. These exceptional wines primarily showcase the Tempranillo grape and represent the particular characteristics of their terroir: Colección Privada, Sierra Cantabria Cuvée, Organza, and the renowned Amancio and El Bosque. There is complete diversity in plantations, with new and century-old vines coveri...

Special offer available for a minimum purchase of £88. Discount voucher valid for four weeks from issue date. Cannot be used in conjunction with other promotions except for the free delivery special offer.