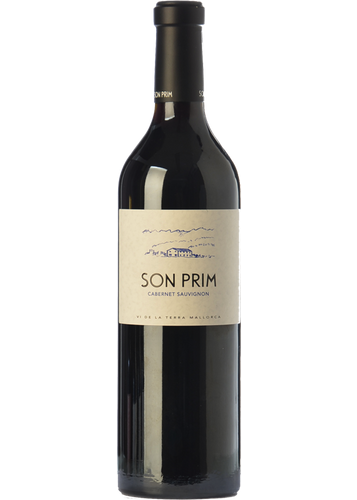 Will the day come when island wines cease to amaze us? Will Mallorcan wines ever stop captivating our palates with every sip? Not, however, with this Son Prim Cabernet, a gem from the Son Prim cellar.

The family-run winery started out on its course back around 2003 with the aim of producing wines of the highest quality from some vines planted in the 1990s. Nowadays, from their 8 hectares of diverse soils (clay, gravel and pebble) they make wines which are largely single varietals that highlight the distinctive character of each grape. In this Cabernet, there is a clear demonstration of the varietal's essence, but also the exotic nature of the islands, that touch, so difficult to explain, which renders Mallorca's wines vibrant and individual.

It has both the appearance and the aroma of a Cabernet, but also saline hints despite the winery being situated in Sencelles, almost in the centre of the island. After its bright ruby colour, balsamic and fine-toasted aromas appear which progress to a palate of ripe tannins and a lactic trace. It's intense and expressive, with a definite Mediterranean character corroborated by its aromas of red plum liqueur, black olives and pepper. On the palate, the sensations become rather more mature and the integrated tannins underpin magnificent fruit; everything it has is in balance, a perfect symbiosis between acidity and sweetness. Its remarkable passage through the mouth is rounded off with subtle notes of toasted cereal derived from the barrel, converting Son Prim Cabernet into one of the most elegant examples of the varietal outside its native Bordeaux.

Been looking for this wine for some time as not readily available in the UK. It’s our regular order in one of our favourite restaurants in Palma. Wine Iis up to its usual standard, excellent customer service from Vinissimus and arrived before the date promised