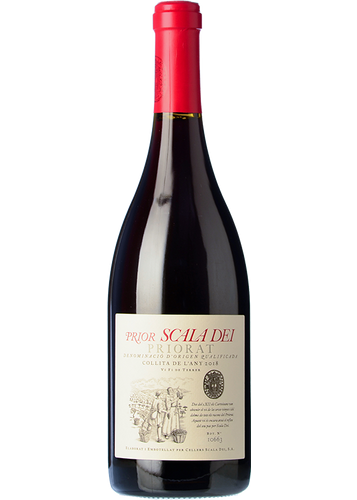 Prior is a very fine wine, one with personality, a wine that emanates tradition and authenticity, and most interesting when it comes to getting better acquainted with the richness of this extraordinary denomination. It's a wine which will captivate the nose, as well as surprise you if you've already seen the label. You may well read it through again to make sure you've got it right. A Priorat? You'll have your doubts for a while. Decant it and carry on sniffing. It's not its composition, because along with the historic Garnacha and Cariñena varieties, there's also some Cabernet and Syrah; it's the terroir. The soil leaves its mark.

Prior has a complex nose yet at the beginning the outstanding aromas are woody, of Mediterranean pine groves in particular and fir trees, which will make you think at first of a wine from neighbouring Montsant. Some of the grapes used in making this wine come from the typical slatey 'llicorella' soils, but also from the clayey ground of the higher altitude vineyards. Just as there are Montsant wines with a Priorat soul, there are wines in the Priorat with a Montsant spirit, or on entry at least. This is one of them, as you will discover.

Celler Scala Dei is the winery most closely linked to the Priorat's history. The Priorat's cradle, it was also the first winery in the denomination to bottle wine, in 1974. The winery has always owned the same vineyards, so both the vines and the vine-growing team know the terroir well. The majority are Garnacha grapevines, but there are also some very old Cariñenas, planted in 1904, as well as Syrah, Merlot and Cabernet Sauvignon. Around 60 ha of vineyards in total, distributed among 42 different estates, with very varied orientations, altitudes and soil types, a diversity that we find in their wines, with Prior not only no exception but also the one which best picks this up, made as it is with grapes from several parcels.

The Garnacha, the foremost variety in this wine's composition, drives the fruit aromas yet its complexity is down to the overall coupage, with plenty of red fruit, but also blueberries, damp notes of undergrowth and hints of raisins, as well as a chocolatey undertone. The Priorat expression has greater presence on the palate, although it's an accessible one since the wine's still very young: meaty, sweetish, not exceptionally robust and very easily drinkable. With a menthol and mild eucalyptus finish. As the saying on the label goes, a "Vi fi de terrer", a fine terroir wine.

Top of the WOW factor

In the search for reasonably priced wines from this outstanding Spanish region, when you find Prior de Scala Dei you know you have found the ultimate. Outstanding in every way - so much so that I like to think that the translation into English would be something like Stairway to God - although I know it's not!

Delicious flavour ,well worth the extra expense and I would recommend to anyone who likes full bodied priorat. Bravo bravo

After destemming and crushing they were fermented at a regulated temperature to preserve all their ripe fruity aromas. They were then aged in barrels (100% French oak) for one year. This aging then continued for one more year in bottles to ensure that the wine would come out to market at its optimum consumption time.

The vine stock is 35 to 60 years old, planted on terraces, and our winegrowing practices are geared to yielding grapes with the characteristics of the wine we want.

Cellers Scala Dei is the founding winery of DOQ Priorat and a benchmark for quality even before the area was rediscovered in the 1980s. They are heirs to the tradition of the Carthusian monks, who selected the best payments in the region, and were the first to sell bottled wines, in 1973. Forgotten for a time, it has regained its vitality and has become one of the best references in the appellation since it became part of the Codorníu Group and the enology management was...