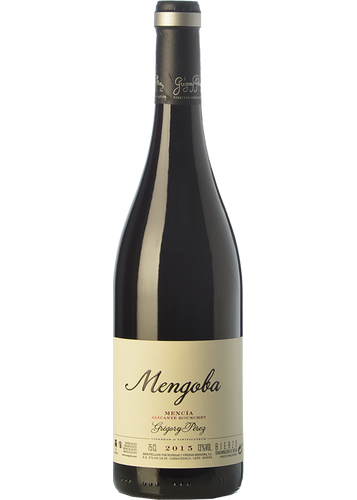 The Mengoba winery is the personal project of the winemaker and vine grower Grégory Pérez. After studying in Bordeaux and working in renowned houses such as Château Grand-Puy-Lacoste and Château Cos d'Estournel, he felt strongly attracted to the Bierzo region. Perhaps it was due to his family's long-standing roots, or maybe the influence of wine-producing friends, but the truth of the matter is that Grégory succeeded in becoming one of the region's most highly regarded and admired producers.

His philosophy as regards work is based on knowledge of and deep respect for the vineyard. Keeping the soils alive seems fundamental to someone who's looking to maintain the richness of the ecosystem. Thus, he only utilises organic fertilisers in small quantities, applies natural remedies to combat diseases and limits yields to the vigour of the plant's natural growth. He uses solely native yeasts and restricts sulphur applications to the absolute minimum. According to Grégory, it's purely by respecting the origin of the grape that authentic wines are obtained.

A good example of all this is the Mengoba red, a blend of Mencía and Alicante Bouschet, an elegant and individual wine that enchants everyone who tries it. The Mencía grapes, the predominant variety, come from a steep, slate-strewn vineyard, over 80 years old and located 700 metres above sea level; the Alicante Bouschet, otherwise known as the Garnacha Tintorera, with 50 year-old vines lying at 550 metres. The land is cultivated traditionally, with animals (cows) playing their part and all the grapes are harvested by hand. In the bodega, the wine is matured in large-capacity oak casks so as not to detract from the fruit.

Thus a red is obtained that's a lovely violet colour with a nose of cherries, black plums, liquorice, blue flowers and a touch of cocoa. On the palate it combines the body and maturity of the Alicante Bouschet (one of the few surviving grapes to have dark pulp) with the Mencía's freshness, resulting in a juicy, fresh, powerful and refined wine. Spices, hints of woodland trees and laurel conceal slightly harsh tannins which fade away with a little aeration. The mouthfeel becomes silky, pleasant, lactic, streamlined by an acidity that makes it very easy to drink. Having a fresh and rounded finish, with ash and spice suggestions that invite further sipping.

This really is a very good red from Bierzo. A very fruity nose. Full bodied, fruity and very smooth. Light on tannins. Very acceptable. Excellent value. Bought one bottle because I was intrigued by the Alicante Bouschet. Drank here in UK with a spicy Italian pasta dish. The wine was an excellent accompaniment. Liked it so much ordered 7 more bottles (all your stock at the time). Had another bottle last night with roast shoulder of lamb. Perfect. Easily worth Parker 93 pts.

Good depth of flavour as you would expect form a Crianza with the old vine having an impact. Seemed better if left open for a bit but the next day in had lost the best of its robustness.

Mengoba is the winery personally run by Gregory Pérez, a real enthusiast within his profession, and today a benchmark in the Bierzo region. Starting out in 1998 at the Château Cos d'Estounel, Gregory learnt the practical art of pruning and wine-growing at the hands of Guy Mallet. In Spain, he formed part of the team at Luna Beberide and was one of the creators of Paixar, one of Bierzo’s best wines. The vineyards of Bodegas Mengoba extend over Espanillo,...