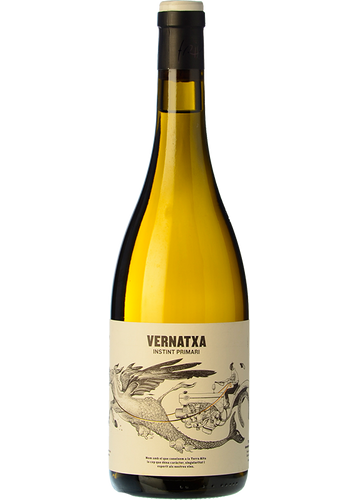 Bringing together one of Spain's denominations with the brightest future, like Terra Alta, and the expertise of one of Cataluña's most promising winemakers, the young Francesc Ferré, couldn't result in anything else but an extraordinary, individual and thrilling wine.

The Vernatxa Blanc is a wine which denotes the varietal's identity: the Garnacha Blanca (also called Vernatxa), the grape responsible for white wines capable of offering the greatest silkiness and Mediterranean expressiveness. The grapes come from one of the oldest vineyards owned by Celler Frisach in the village of Corbera d'Ebre, and begin their passage in the winery macerating with skins in tanks for two days. After fermentation, the wine rests for about half a year in 500-litre French oak barrels without any toasting, which confer light tannins and an extra touch of unctuosity. It's bottled without any filtering or clarifying, with the clear objective of transferring the landscape to the bottle.

On the nose it boasts aromas of white fruit, fennel, wild flowers and grapefruit. Its entry on the palate is citrusy and it has an enveloping mouthfeel; it reveals breadth and depth, becoming thrilling, almost magical. It conveys energy from start to finish, equally delicate and rustic. As it flows, it evokes hints of mandarin peel, green almonds and salt, only to end by finishing elegantly, evoking candied fruits. A jewel emanating from a more artisanal form of winemaking. An absolute must.

The write-up by Vinissimus is uncannily accurate. You can smell the fennel and the grapefruit with the first whiff, but also nectarines and tangerine. I drank it over two days, the first was richer, more balanced but on the second it still kept going, with the mild bitterness of the grapefruit to the forefront. My only reservation —and that is very personal— is that the candied fruit aftertaste can become a bit cloying. Otherwise, delicious.

The Celler Frisach project run by Francesc Ferré and his family started out as a defiant decision to make their own wines rather than sell their grapes to large winemakers for a very poor price. Convinced their vineyards have a special character, which add value to their fruit, they started to make wine with simple modest facilities which have expanded year by year. Francesc and his brother Joan are among the few youngsters who have decided to continue working the land in the...