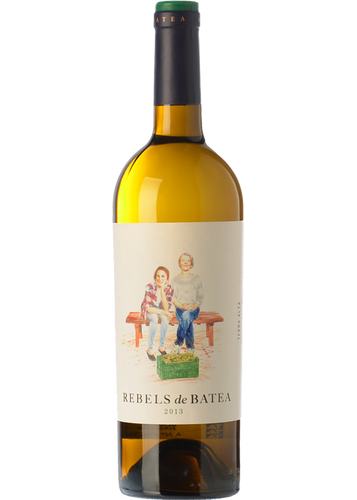 Rebels de Batea is a wine with no delusions or false pretensions: its richness rightly lies in its ability to exhibit with the utmost clarity the character shown by old Garnacha Blanca vines in the singular Terra Alta terrain.

Made using traditional methods, with scrupulous respect for the ancestral past of this ancient wine-producing region, the Rebels de Batea Blanco has its stay in barrel kept short to avoid blemishing the noble expression of both variety and terroir.

It is a fresh young wine, with fragrant aromas of peach, pear and apple, and notes of white flowers and nutmeg which imbue it with finesse and elegance. The Garnacha Blanca’s typicity is revealed on the palate especially, depicting a strong citrus characteristic, with plenty of volume and considerable sinew. The toasty nuances which appear on the finish endow it with complexity. In short, this is a balanced, most likeable and inviting white.

Without a doubt, Rebels de Batea Blanco is the truest reflection in liquid form of the beauty of this charming Mediterranean region, the Terra Alta.

7 Magnífics is a collection of seven high quality wines, created with a very clear aim in mind: to be the true reflection of a terroir, climate and landscape, and also the local people. A collection of seven wines which magnificently convey the wine-making past and present of some of the most historic Catalan denominations. To launch the collection are two wines from the Terra Alta DO: Rebels de Batea, a Garnacha Blanca and a Garnacha Tinta, two wines capable of transforming...