Up to 15% off over Priorat and Montsant, two sides to the same region
Spain/Ribera del Duero/Vega Sicilia Único Reserva Especial - Edición 2021 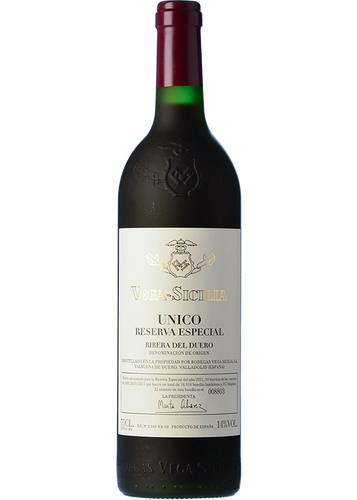 The "Único" Reserva Especial is released as a non-vintage blend and brings together only the finest fruit of Vega Sicilia's best harvests. Traditional in its concept, it dates back to times when most bodegas sold their wines directly from the cask, as bottling was uncommon.

After harvest, the current year's wine was offered along with the 'Reserva Especial', blending the best harvests and defining the bodega as its most representational wine.

Dark cherry red in colour, it has an elegant nose and a refined, spicy bouquet. Concentrated and mature, this classic wine also draws into the composition the extremely fine wood used in ageing and the importance of time spent in bottle, which endow it with roundness, subtlety and powerfulness.

Founded in 1864 by Eloy Lecanda and run today by the Álvarez family, Vega Sicilia is the most emblematic winery in Spain. It is in fact one of the oldest in Spain and undoubtedly one of the best in the world. Located in Valbuena de Duero, its name comes from ‘vega’, the Spanish word to describe the low-lying fertile land beside the Duero River, and a phonetic deformation of Cecilia, as the estate was originally known as Coto de Santa Cecilia.  Ever...