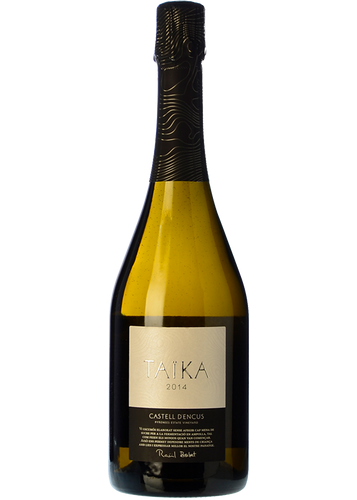 Taika is one of Raúl Bobet's latest creations in his spiritual retreat at Castell d'Encús. There he combines his meditation with viticulture and brings back to life historic techniques such as the use of vats hewn into the rock, a practice which the monks at the Encús monastery used to employ in the 12th Century for ageing some of their wines. His intention with Taika is to restore another ancient tradition, the manufacture of sparkling wines as it was done in ages past.

This very old process, which consists of obtaining bubbles from a single fermentation, was prior to the Champenoise method and successfully recalls aromas and sensations belonging to another era. Taika is made from grapes harvested by hand, emanating from an estate lying at 1,000 metres above sea level in the Catalan Pyrenees; it's bottled in the middle of fermentation so that the remaining sugar continues being expended in the bottle and the carbon dioxide released during this procedure can't escape. Thus, the little over 4000 bottles of this extraordinary sparkling wine see the light of day after 27 months of ageing in bottle, with no other sugar than that provided by the grapes in their vinification.

Pale in colour and with tiny, lively bubbles, its nose offers an amazing first contact, mingling the smell of hay with hints of quince and peach. Soon lactic aromas emerge which, combined with the citric touches, can bring to mind home-made lemon yoghurt. The minerality sensation is very intense from the first olfactory contact and its complexity makes itself felt at all times. The aromas don't stop evolving, before long reminiscent of floury biscuit and white flowers. On the palate it's at once expansive and fresh, with an acidity that's more typical of Champagne or of other sparkling wines from cool climates, having a wonderful and enchanting effervescence.

We recommend serving it in a white wine glass, and after a light airing in order to appreciate all its elegance to the full. It will continue to develop in bottle.

Passionate about nature, a perfectionist and with a deep thirst for knowledge, Raül Bobet is a winemaker who has taken his enterprise to the loftiest heights by planting his vineyards in the Pyrenees area. Coming under the Costers del Segre D.O, Castell d'Encús is the personal project of this winemaker with a long-standing career and responsible too for the wines of Ferrer Bobet. Castell d'Encús is located at an altitude of 1,000 metres, in a privileged setting...