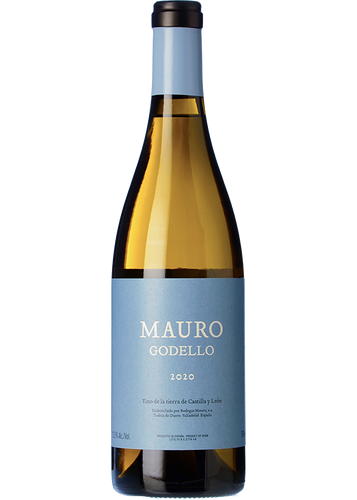 Mauro Godello is a dream the García family had which became a reality, a good white for everyone, and knowing the fine work done by Mariano and his children, in time we shall find out whether it will turn out to be a bit more than a good white; in fact, it will surely be a great white that will distinguish the Godello variety's good name once again.

For the García family, and especially for Eduardo García, creator of what has become known as "the Mauro white", the Godello is a variety which stands out for its minerality, and that's why in the winemaking they avoid malolactic fermentation and concentrate on its ageing on the lees. Mauro Godello is a wine which is notable for its great acidity, its elegance and refinement, and its marked minerality. This wine is fresh, harmonious, austere, with plenty of structure, a saline touch on the palate, and it lingers well in the mouth.

Mauro Godello is made using Godello grapes from young vines planted on a slope, the two small parcels lying on poor soil, with the ground sandy due to slate disintegration, and very low yields. In production, the wine comes into contact with its lees and ages for 8 months in two 500-litre oak barrels, one new and the other used before.

Don't think about it for too long. There's only one Mauro Blanco, and very few bottles!

Bodegas Mauro is the first family-run winery under Mariano García to lie in Castile-Leon (San Román Bodegas y Viñedos falls within the Toro denomination) and is named in honour of his father, Mauro García. Founded in 1980, two years before the Ribera del Duero D.O. was established, Bodegas Mauro was excluded from the Denomination of Origin for strictly adhered to reasons of geographical delineation at the time it was set up, when historical arguments...