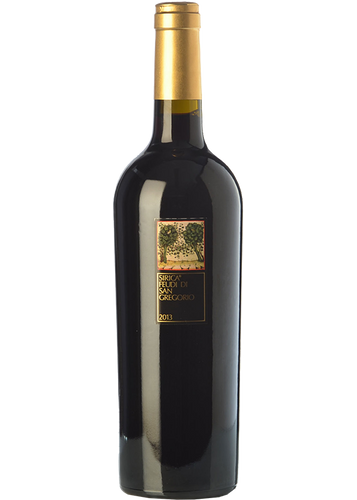 The Sirica is an ancient variety with a mystery behind its origins, and in all likelihood it was used by the Romans in their winemaking. Although it apparently disappeared without trace over the centuries, we can still find it nowadays sparsely scattered over Italy. After the discovery in Irpinia of four vines aged more than two hundred years old, Feudi di San Gregorio has carried out an in-depth study of this variety's DNA and reproduced it in a small vineyard from which stems a unique wine, profoundly Mediterranean and with great personality.

Sirica appears a beautiful ruby colour (the name of the variety itself probably derives from "syricum", a red dye widely used in Roman times) and releases rich notes of blackberry, myrtle, liquorice and black pepper, in a clean-cut bouquet from which each nuance emerges with amazing vitality. The wild nature of this variety is tamed in the cellar through ageing in French oak barrels, and this makes Sirica a pleasant drink suiting all palates. A fresh, smooth wine that's very well-balanced and has some characteristically velvety tannins.

Some history that was bottled

This one is a unique wine. The vines have survived from roman times and this is as much a curiosity as it is a proper wine. Just let it breath awhile in decanter and then have a sip. Medium acidity, soft tannins and this one goes really well with food - very versatile wine. Intense nose with dark berries and even menthol in it. Very earthy taste with some pepper in it and a long finish. This kind of takes you back to the olden days.

Very good wine for its price

Full-bodied, robust and rather rustic but smooth. Improves if you decant it and probably better if you wait a couple of years before drinking it. It is great value for money so worth drinking now anyway.

Another hit from Campania

Smooth, rich and lush in the mouth, this is another hit from the San Gregorio stable.

Lovely red that is drinking well now but will age even better. Great value also

I loved this bottle. Robust, authentic. A earthy flavor that robustly flow.

At the forefront of the wine-making renaissance in the Campania region, Feudi di San Gregorio has only just turned 30 years old. We're celebrating its birthday with a special promotion showcasing the excellent catalogue of this young yet already historic winery . A selection of wines which share a well-defined style and an almost symbiotic identification with their lands of origin, both here and in other of this company’s wineries throughout Italy. A real heritage that in itself...