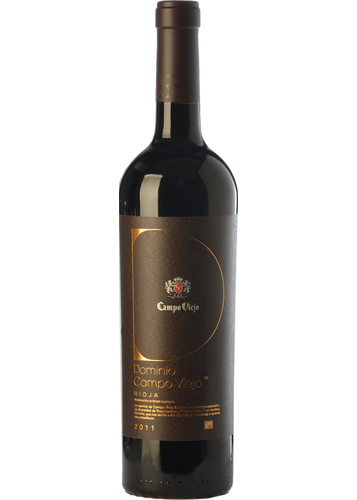 Campo Viejo is one of Rioja's most emblematic wineries. Located in the heart of the denomination, in Logroño, and belonging to the Pernod Ricard Group, its installations give rise to wines under the brand names Campo Viejo, Alcorta, Azpilicueta and Marqués de Villamagna. The building is a real benchmark in sustainability and a fine example of respect for the environment, with the architecture intended to integrate naturally into the landscape and showcase an almost artisanal way of working. Set more than 20 metres underground, the cellar offers the most suitable and very special conditions for ageing the wine.

Its Dominio Campo Viejo reflects authentic Rioja; it's a wine which results from the blending of the region's typical varieties and the amalgamating of the different sub-zones. The sensitivity and passion of its head winemaker, Elena Adell, are also undeniably present in this wine, Campo Viejo's most special, launched in 2006 to commemorate the brand's 50th anniversary. Dominio Campo Viejo is produced solely in the best vintage years and its production is very limited.

The wine speaks for itself: its colour, aroma and long passage on the palate are an absolute delight. It's a lovely Picota cherry colour with a very lively, ruby-hued rim and of medium density. On the nose, its great intensity displays perfectly ripe red fruit, sweet spices, balsamic notes and hints of tiramisu, due to its lactic touches, of coffee and chocolate. It moves through the palate fresh and fruit-forward, flavoursome, mineral and earthy with an elegant and complex finish.

The winery's entry level wines can be found in most supermarkets but this higher end offering is a good wine with a bit of personality. characterful structured Rioja

Very powerful bouquet full of wonderful smells I would recommend it with roast oor a nice steak. Another good wine from vinissimus

A real gem. One of the smoothest Spanish wines I've ever tasted, really pleasant drinking I Will definitely buy again

Campo Viejo is one of the Rioja region's most well-established names and produces on its premises three premium brands that sell in over 70 countries: Campo Viejo, Azpilicueta and Alcorta. Since its foundation in 1959, Campo Viejo has undergone constant evolution, combining in a very effective way an artisanal treatment of its wines with the most cutting-edge technology as well as respect for its immediate surroundings and the environment....