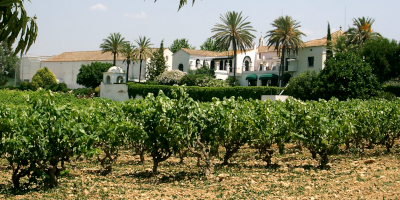 Located at an altitude of 200-250 metres above sea level, in the rugged terrain of the Garraf Massif, Finca Viladellops produces wines with a discernible character of the terroir. The soils, which are...

Located at an altitude of 200-250 metres above sea level, in the rugged terrain of the Garraf Massif, Finca Viladellops produces wines with a discernible character of the terroir. The soils, which are poor, determine the lack of vigour in the plants, the low yields and small berries, and provide the wines with minerality, as well as iodine and saline notes to the whites, and chalky notes to the reds. The large amount of sediments and marine fossils found in this land are clear evidence that this estate was underneath the sea at some time in the past.

The winery dates from 1877. At that time, the Desvalls family who owned the land at Viladellops, a small village settlement, were making wine in bulk. In 1980 they decided to sell their grapes to other producers, and it was in 1999 that Marcelo Desvalls took the decision to end this tradition and laid the foundations of the present project with the valued assistance of Josep Lluís Pérez, the well-known wine consultant. They selected a number of parcels on the estate, replanted 20 ha with massal selections (propagated from the best vines) of Garnachas sourced from Cornudella (Priorat) and a family-owned property in southern Roussillon, and retained the old Xarel·lo strains, coming across among them the unusual variety Xarel·lo Rosat. Although the plantation includes some Syrah, Merlot and Mercelán grapevines, there is a definite predominance of the traditional varieties, Garnacha and Xarel·lo, corresponding to their intention to maintain the typicity in their wines. The sea is only 10 km away and strengthens this typicity as the sea breeze hydrates the vines during the hot summer mornings, leading to a perfect ripening of the fruit which is farmed organically.

Today the estate covers 500 hectares, including Mediterranean woodlands, cereal crops, and 60 hectares of vineyards belonging to the D.O. Penedés appellation. Amongst the vines, we can find ancient remains such as dry-stone shelters or wells dug out into the rocks. The flower with eight petals and five dots arranged to form a cross which today constitutes the winery's logo, represents the seal used as a rubric for the Desvalls family's surnames (the Desvalls lineage dates back to the 12th Century). 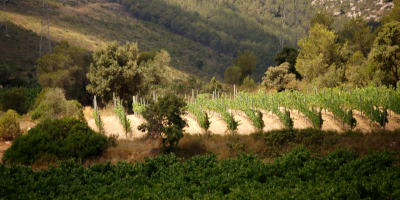