In 1965 Benito Santos was the first vine grower invited to sell his wine at the Albariño Festival. He has since died and been buried in the grounds of the Monastery of Cálago, at Vilanova de Arousa. His work showed his sincerity and respect for nature (organic farming), enabling the production of wines that exhibit the marked effect of their terroir.

Benito Santos held the view that wines should be made in the vineyard and not in the winery.

Benito Santos owned three vineyards, and two of them lie in the shelter of Romanesque churches, with the third being the mythical Xoan vineyard. The Igrexario de Saiar vineyard covers an area of 5.64 ha, beside the Romanesque Church of San Esteban de Saiar; the Igrexario de Bemil vineyard covers an area of 0.99 ha, lying by the Santa María de Bemil Church. Both have been certified by Galicia's Regulatory Council for Ecological Agriculture. The Xoan vineyard, with its 0.55 ha, is the one that Benito Santos originally acquired first and boasts ungrafted vines aged over 85 years old. 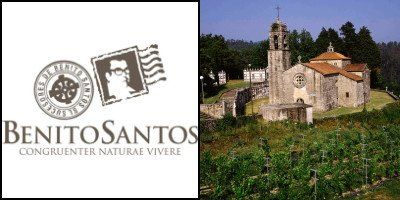