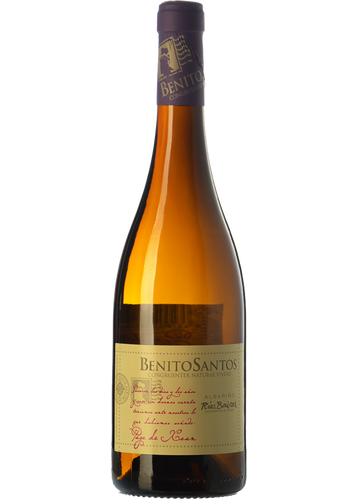 Pago de Xoan is the original vineyard of Successors of Benito Santos. As a vineyard it’s not without merits, but its antiquity and importance in the winery’s founding have resulted in it becoming the most special of the Benito Santos parcels. It is a vineyard of a mere half hectare (0.55 ha), therefore tiny, as are all the others, with vines aged over 85 years old extending over the slopes. Their south-east orientation enables excellent ripening of the grapes, while the soils with their sandy texture and granite nature endow the wine with a significant minerality. A special vineyard and first-class quality grapes, the essence of a very fine wine in the making.

The Albariño variety evolves beautifully if it is treated with due respect and, on becoming acquainted with this wine, which is released onto the market after a slow evolution in bottle, we’re led to believe that it’s a real shame the majority of Albariños are drunk whilst young, perceived by most consumers to be wines with razor-sharp acidity. What a wealth of richness to miss out on!

Pago de Xoan is a wine to take time over, mature and balanced. It appears pale in the glass, not showing much colour, with flecks of new gold. On the nose, the first impression is of ripe fruit, apple and pear peel, notes of very ripe fruit above all, notes acquired through evolution which bring warmth, immediately giving way to more balsamic touches and very fresh aromas, highlighting citrus fruits and fresh pineapple. Pago de Xoan is also a marine wine, with sea and brine notes; we can definitely imagine it already on the table, a delicious accompaniment to white meats and fish. A white boasting a lot of personality and above all identity, it smells of the countryside, reminiscent of hillside pastures.

On the palate it is meaty, profound, mature, mineral, fresh and at the same time warm (hints of crusty bread), intense, fruity, saline and leaves a balsamic touch. Our mouths are watering just thinking of the long list of dishes we’d serve it with.

In 1965 Benito Santos was the first vine grower invited to sell his wine at the Albariño Festival. He has since died and been buried in the grounds of the Monastery of Cálago, at Vilanova de Arousa. His work showed his sincerity and respect for nature (organic farming), enabling the production of wines that exhibit the marked effect of their terroir. Benito Santos held the view that wines should be made in the vineyard and not in the winery. Benito Santos owned three vineyards,...