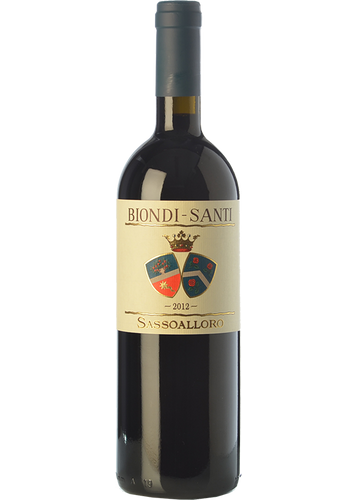 Castello di Montepò is not only one of Tuscany's most picturesque fortresses, it's also the birthplace of the Biondi Santi family's latest project, the same lineage that laid the foundations for production of the legendary Brunello di Montalcino. Here in the Maremma, land of the Morellino (the name given to the Sangiovese grape in this region), Jacopo Biondi Santi has grown this variety on the excellent lands which the winery owns in the hills, at a height of between 300 and 450 metres above sea level and on soils rich in loam and clay, but also in limestone and fossils.

Sassoalloro is the emblematic wine in the Biondi Santi range, fruit of the development of a Sangiovese clone in the hands of this family for over 200 years. A masterpiece of Italian winemaking that exhibits on the nose a perfect balance between the pleasantness of the notes of violets and red forest fruits and the austerity of its aromas of earth and undergrowth.

As a result of judicious ageing for 14 months in French barrels without toasting, the elegance and the powerfulness too come together on the palate. With a velvety texture and a delightful smoothness, the Sassoalloro's balance is centred upon a good structure which augurs longevity. An enveloping and elegant Sangiovese, with the style and perfection that we have become accustomed to from the Biondi Santi family's other winery, Greppo.