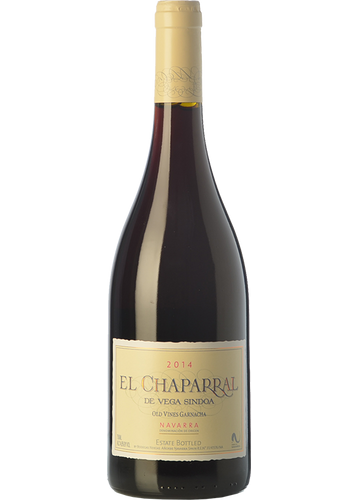 During the 1960s, the serious situation surrounding the price of grapes caused the destruction of a significant number of vines in the Nekeas Valley. Only a few parcels of Garnacha remained, lying amidst the overgrown bushes at the top of the valley. Years later, in 1997, when these parcels were on the point of disappearing forever, Nekeas created their first red wine using these grapes, which they appropriately named after the place, El Chaparral de Vega Sindoa.

El Chaparral is the product of Garnacha grapes originating from vines aged over 70 years old that grow in a valley caught between Mediterranean and Cantabrian climates; the resultant wine is carefully matured in barrels for several months.

The predominant aromas of this wine are lactic, vanilla and vinous acquired from the wood; all well-concentrated and tightly-held within the glass until gradually gentle menthol notes are released, along with balsamic and spicy wafts. Fresh-textured, Atlantic-influenced and spiced with fine-grained oak wood, El Chaparral boasts many great attributes.

Mouth filling and full of flavour

An very good wine that promises a lot on the nose and does not disappoint. Very full dark fruit flavours with hint of spice and a good long finish. Smooth with gentle tannins and acidity.

Nekeas is situated in the 'valley of the stars', Valdizarbe, where vine cultivation is only made possible due to the presence of the Sierra del Perdón: a mountainous barrier that protects the Nekeas valley from the cold winds of the Pyrenees. The Atlantic (it lies 70 km from the Atlantic Ocean) and Mediterranean climatic influences, and a diverse collection of rocky outcrops due to the irregular nature of its mountain geography (red, white and brownish-grey clay, rocky-stony...