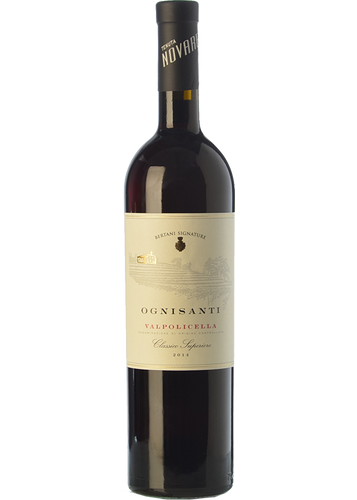 Can a Valpolicella excite us like an Amarone or a great Ripasso does? At Bertani, and many other wineries, they've succeeded in doing so. Ognisanti is now a paradigm of this denomination and a genuine masterpiece of the Venetian tradition. A Valpolicella of unparalleled elegance and incredible silkiness thanks to its ageing for 18 month in barrels, a quarter of them new.

Fruit of a careful selection of the best grapes of the Tenuta Novare cru, owned by Bertani since 1957, Ognisanti owes its name to an ancient chapel situated in the centre of the vineyard. The ideal southern exposure and soils rich in limestone endow the Corvina and Rondinella varieties with perfect fullness, which converts into a wine of great freshness and whose long ageing confers a longevity that can last for decades.

The harvest, occurring rather late, combined with a long, slow maceration, gives the wine its rich concentration and an elegance that becomes ever more noticeable after its maturation in barrels and ultimate refinement of 6 months in bottle. The garnet hues vouch for its perfect evolution and, on the nose, it displays notes of ripe cherries, jam, sweet spices such as cinnamon, along with eucalyptus, black pepper and leather.

It doesn't disappoint on the palate either, and we encounter a smooth wine which brings to mind the finest Amarones. A smoothness that's accompanied by an optimal freshness, magnificent and enveloping breadth, with sweet notes of dried plums, of light toasty notes and a very lengthy finish.

It was exactly what I was expected

Very fruity, juicy with elegant acidity and no hash tannin. Good value and food friendly wine. Even as aperitif, it is a good choice.

After having been a pupil of Dr. Guyot in Burgundy, in 1857 Gaetano Bertani returned to Venice to put into practice the most modern systems of vine cultivation. As a result of this, the Bertani name has passed into both Italian and European wine history as the winery that brought to the Valpolicella the fundamental technique for producing wines in the classic style and impeccably balanced. Held in high regard since the 19th Century and served at the most exclusive tables of...