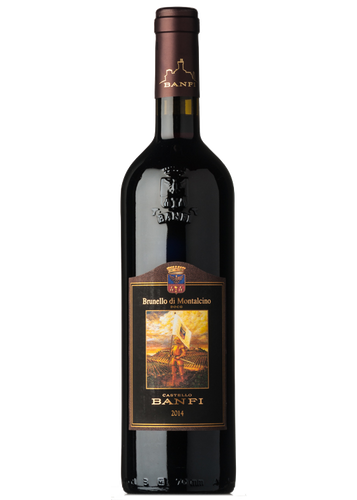 Since 1978 Castello Banfi has embodied the largest project in Tuscany which has reconciled terroir and technological innovation. Founded by two Italian-American brothers John and Harry Mariani in the late 1970s, the winery quickly became an empire of Italian wine, with mind-boggling numbers: about 10 million bottles produced each year and over 800 hectares of property. Castello Banfi has thus fully acquired the role of ambassador in the world of Italian and Tuscan excellence in particular.

The style, centred on the enological correctness of the product, has always embraced the best compromise between identity and modern taste. In this sense, the winery has certainly been able to interpret times and seasons, masterfully combining sometimes opposing needs. As a result, production has expanded enormously, reaching all the most significant areas of Tuscany.

Among these Montalcino certainly stands out, where the winery still has its headquarters, in Poggio alle Mura, near the wonderful castle overlooking the small village. Brunello is perhaps the most direct and clean expression of the winery’s style. It comes from different vineyards, located between 200 and 350 metres above sea level, and benefits from ageing in wood which is made up of 70% large barrels and 30% barrique, a clear indication of the modernising orientation of the product.

Wood, it must be said, which is perfectly integrated, starting from the colour of the wine, which still appears strongly ruby. The bouquet is fruity and jammy, with ferrous and ethereal echoes of rubber and caoutchouc. There is also a more developed subtext, which recalls, in addition to sweet spices like cinnamon, skins and animal notes. Consistent with the style, the tannin is already quite domesticated, and, although supported by a fine acidic shoulder, the wine flows with enveloping pleasure.

True to style. modern and accessible.

Likeable and modern in style. Acid and fruit in focus with oaky parts to add to structure. Keep for at least a couple of years for maximum pleasure.

It’s a Banfi, great year, magnificent Brunello! Relation price/quality at it’s best if you are looking for Sangiovese perfection!

Great Brunello, make sure it's aerated