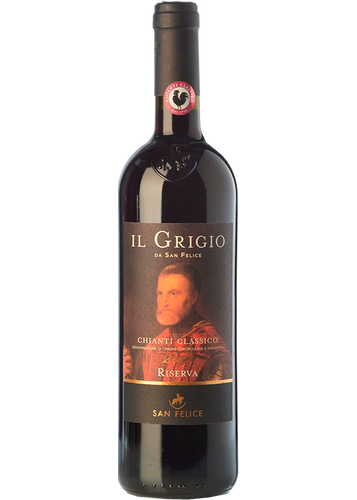 Il Grigio owes its name to a splendid idea of the San Felice winery in Castelnuovo Berardenga, the heart of Chianti Classico, which was to dedicate a wine to one of the most famous paintings by Titian, a master of the Venetian school who worked in the Venetian Lagoon throughout the 16th century. A tribute, in short, to our Renaissance, embodied by Titian's Man in Armour (circa 1530), now in the Pinacoteca Ambrosiana in Milan. According to Federico Borromeo, Titian actually painted a portrait of his father, who used to joke that he had become a noble knight thanks to the intellectual aristocracy that his son had, so to speak, bestowed upon him.

A noble wine, then, but also a familiar, warm, and welcoming wine, anything but austere or prickly. A single-variety Sangiovese, the Il Grigio reserve arrives in the glass after two years of ageing in wood, 80% large and 20% barriques. The hardness is guaranteed by the soils, which are composed of the classic Chianti mixture of marl, limestone, clay and skeleton.

In the glass it is a beautiful deep ruby red colour, which heralds the temperament and vigour suggested by Titian's painting. The bouquet is intense and persistent with typical hints of violet and red berries. It is a full-bodied wine, with juicy tannins and fresh acidity. The wood, well dosed, smoothes out the edges giving further spicy sensations and balanced harmony. It pairs perfectly with grilled meats, roast pigeon and beef steak.

I've been searching for an exciting chianti and at last I have found one to "hit the spot".

I've been searching for an exciting chianti and at last I have found one to "hit the spot". Beautifully balanced. You can taste the fruit, average tannins with acidity which enhances the flavour instead of overwhelming it. Deep red colour on pouring (like a healthy claret) and clings to the glass in waves. Tastes of cherry and oak. Taste lingers. Went perfectly with a spicy lamb curry (not very Italian - I know). A healthy 4 star bottle. More will be ordered.

This is a delicious wine with a great balance of smooth fruit, subtle overtones and a long but delicate finish. Robust in character but rounded and gently complex. Excellent at this price.

Good but be patient

Well made, traditional style Chianti Classico Riserva, the concentration and balance is there but this will need another 5+ years to reach it's peak.

A delicious and great value Chianti. Would definitely recommend.