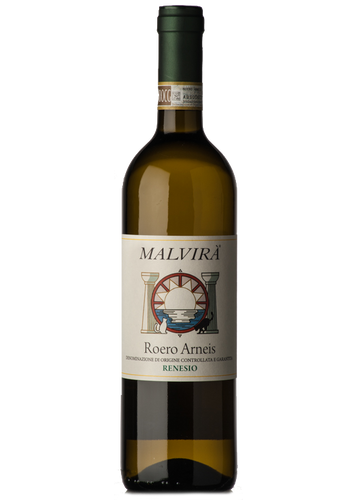 Giuseppe Damonte began producing wine in the 1950s in his family-run winery with a dream: to bottle the soul and charm of the land he loves, to allow people to discover it sip by sip. In the mid-Seventies, the winery was renamed Malvirà, after the old building constructed at the end of the nineteenth century in the centre of the village of Canale, which became the headquarters of the family winery. The curious name (which roughly means "wrongly turned") derives from the courtyard's northern exposure instead of the southern one, as was the farming tradition. In 1989 the Malvirà winery was moved to its present location at the foot of the SS. Trinità vineyard, with further extensions and functional additions.

Massimo and Roberto, the second generation of the family, have inherited from Giuseppe a production philosophy centred entirely on the typicality of the wines of the Roero: refined and expressive wines, capable of offering sincere territorial emotions. The conversion of the vineyards to organic farming is now a permanent part of this project, further demonstrating the care and respect for the land that characterise the family's work. In the cellar, all the wines are labelled with tarot symbols, which allusively and intriguingly tell something of the sensory experience awaiting the wine drinker.

The Malvirà style involves the same vinification for all the parcels, or rather the crus, of the estate. A “Burgundy style”, one might say, which is to the advantage of enhancing the microclimates and soils that characterise the Roero. Since 2017, all the Arneis wines have been certified organic, which confirms once again how much the Damonte brothers focus on this variety, which is the one that has given the Roero a great qualitative and commercial boost. In the range, the Roero Riserva reds express consistency of quality and a very high level of expression. The Renesio is a fresh and dynamic Nebbiolo, the Trinità is incisive, long and subtle; the Mombeltramo is consistent and velvety, with great class and territoriality. Among the Arneis, the Trinità cru stands out for its sapidity, fresh and slender, while the Saglietto is full-bodied and round, thanks to a significant period of resting in wood.

This would suffice to describe the level of experimentation that Malvirà carries out on Arneis, but in addition to these references there is also the one that comes from the Renesio cru, an authentic protagonist in the history of Piedmontese white wine. Vigna Renesio: it is in fact on this estate that we have the first information dating back to 1478 on the cultivation of the Arneis grape in the Alba area. According to some historical documents from the archives of the Conti Roero, owners of these plots of land in the Middle Ages, the name of this vineyard can be traced back to that of the Arneis vine. In fact, at that time it was called “Reneysium”, later “Renexij” and then Italianised as “Ornesio”.

The vineyard is characterised at the top by a double row of cypress trees reminiscent of Tuscany and by an old farmhouse dating back to 1700. Situated in the municipality of Canale, it faces south-northeast, at an altitude between 260 and 320 metres; it is spread over 6.5 hectares and has clayey-calcareous soil, which makes it suitable for both Nebbiolo and Arneis, which in fact is full-bodied, austere and suited to longevity.

Renesio, vinified and aged "simply" for 7-8 months in steel with frequent batonnage, represents the quintessence of the top of the range classic Arneis and, in general, of the great native Italian white wine. A whispered pale straw-coloured glass, sometimes with greenish reflections. On the nose it expresses a bouquet that, at first seems delicate and hinted at, with notes of white flowers, fragrant yellow fruit, white peach, vegetable hints and very slight hints of spice. Preceded by a very mineral note of chalk, the taste is explosive, tasty and dynamically fresh. A solid, textured flavour with great balance and remarkable persistence, in a perfect balance between sweet and bitter notes. It can be paired with virtually any type of food, but it is unbeatable with sushi and sashimi, spaghetti, seafood, scallops, rabbit, fresh cheeses.

Giuseppe Damonte began producing wine in the 1950s in his family-run winery with a dream: to bottle the soul and charm of the land he loves, to allow people to discover it sip by sip. In the mid-Seventies, the winery was renamed Malvirà, after the old building constructed at the end of the nineteenth century in the centre of the village of Canale, which became the headquarters of the family winery. The curious name (which roughly means "wrongly turned") derives from the...