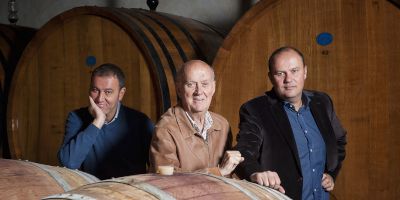 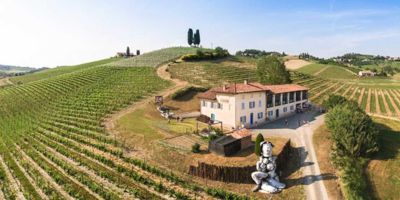 The fabric sacks which were used to filter the Canelli muscat wine are washed by hand. Piemonte, early 20th century. It is a relic of another era that the Chiarlo family gives us with its patriarch Pietro. It’s a humble job, but which led this man to conceive a more multi-faceted wine project. And above all to sense the extraordinary potentialities of this territory, destined to become Heritage Listed thanks to its vineyards.

Michele was born in 1935, Pietro’s eldest son. After middle school, Michele managed to enrol in the Alba wine school "on condition that he passed every year". Mission accomplished: in 1956 he was at the helm of the winery and as one of the first in the area, he began to identify the best crus in this part of Monferrato and the Langhe. In 1958 he bottled the first Barolo. Now he has rows of vines between Cerequio and Cannubi, true legends of the appellation.

A versatile and innovative man, Michele understood that wine needs to be valorised in a broader commercial context, but also a historical, artistic and cultural one. In 2003 the Art Park La Court was born, inside the La Court estate; the first example of land art in the vineyards.

Michele’s real masterpiece is the rediscovery of Barbera. He was the first to conceive the potential of aging, taking it from a simple meal wine to an important red wine for tasting. A finally adult, stable wine, whose rusticity, if properly guided, can be the raw material of reds of exceptional international stature, even aged in wood.

To crown this journey, in 1995 he consecrated his "temple" to Barbera. Michele acquired the Tenuta La Court, twenty extraordinary hectares in Castelnuovo Calcea, the historical heart of Barbera. Not only a place of production, but a laboratory where wine, landscape and community find land on which to dialogue. It was at La Court that Michele Chiarlo and his children’s passion for the Nizza DOCG, the "Super Barbera" of Monferrato was born.

With Barbera and Moscato always in its heart, today the winery has vineyards also in Gavi. Its most representative wines, in addition to the magical Barolos, are the Barberas: La Court, multi-faceted, evolved and complex the quintessence of Nice terroir and variety, and I Cipressi, a Nizza DOCG that in 2018, thanks to its pleasantness but also to its spicy minerality, was declared by Wine Enthusiast the best wine in the world.