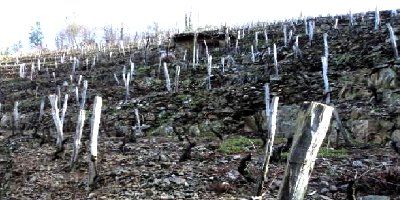 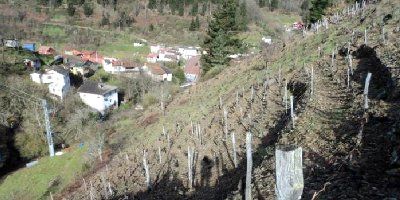 A new project involving Nicolás Marcos, who after his travels in France and Toro, decided to establish this winery as an Independent Vinegrower of Cangas del Narcea. Using biodynamic methods, he grows the indigenous varieties Verdejo Tinto, Carrasquín, Albarín Blanca and Albarín Tinta among others, distributed in small parcels. So in the Tebongo plot there are Verdejo Tinto and Mencía vines growing on clay-loam soils at an altitude of 350 metres. The predominant variety at La Zorrina is Carrasquín, with slate, anthracite and quartz in the soil composition, whilst Retortoiro has the same sort of soil and grows mainly Verdejo Tinta. The Paraxa plot has Carrasquín, Albarín Tinto and Albarín Blanca vines along with juniper and fennel bushes. Lying at an altitude of 680 metres, Borracán boasts the oldest grapevines, more than 100 years old. This parcel of 0.80 ha is divided into two, and one half is planted with Verdejo Tinta and the other half has a combination of the rest of the varieties the winery works with.