The Magnum wine bottle and the large wine formats

You have probably heard of the Magnum bottle or maybe even had the privilege of uncorking one. But would you know the name of a 9 or 12-litre bottle, for example? Did you know that there are 20 and even 30-litre bottles?

We propose you discover all the sizes of large wine bottles, perfect for events and celebrations, and some curiosities about the most widespread large formats. 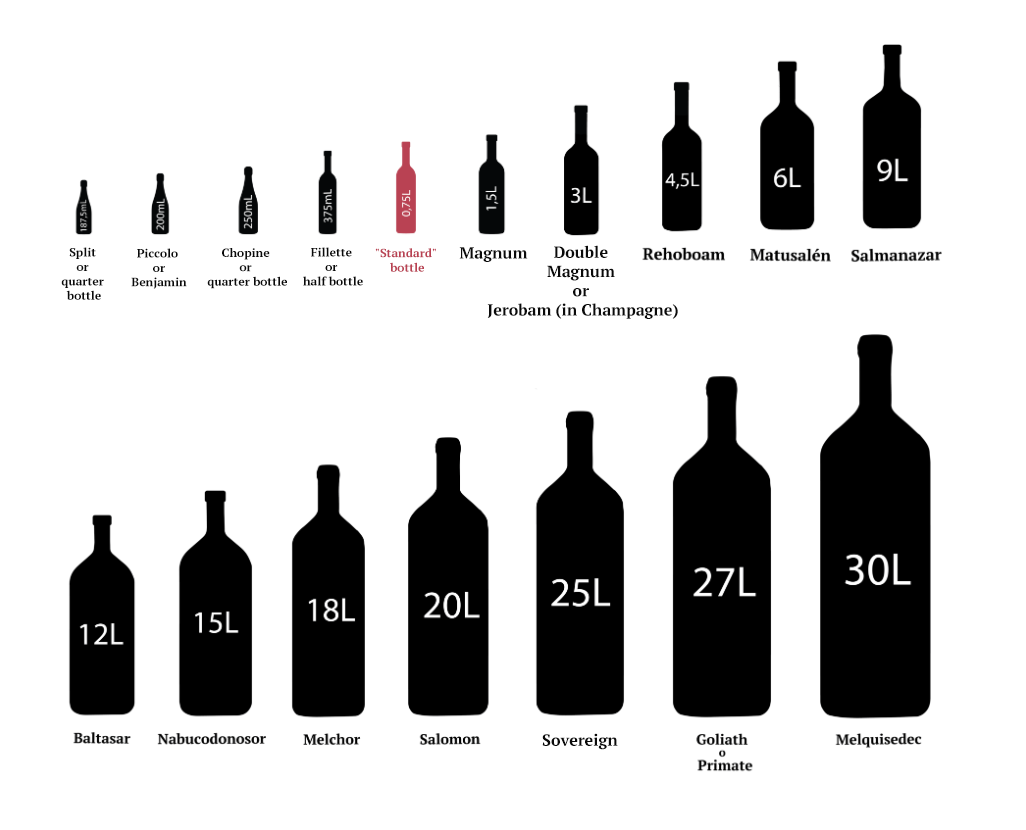 All sizes of wine bottles:

You may have noticed a couple of details. The first is that the 3L bottle in Champagne is called Jerobam, whereas in Bordeaux the same name refers to the 4.5L format, which is often a source of confusion. Also, although 5L bottles do exist, they do not have a traditional name and are therefore not listed, although it is possible to find a variety of special editions from different wineries bottled in this format.

You may also have noticed that many of the names are of biblical or Hebrew kingly origin. For example, the name of the 15L bottle, called Nebuchadnezzar, is inspired by the ancient Babylonian ruler Nebuchadnezzar II, who is credited with the construction of the famous Hanging Gardens of Babylon. There is no clear consensus as to the reason for the popularisation of these names.

There are several theories about why the 750 ml format is used as the standard rather than another, although these are difficult to contrast and may be due to urban legends. Some say it is due to the average amount of wine obtained from 1kg of grapes, although of course, this varies according to the type of grape. It is also said to be an ideal bottle size for wine preservation. Another theory, perhaps one of the most widely accepted, is that during the hegemony of the British Empire this format came into widespread use. A gallon is equivalent to 4.5L, which divided by 6, gives us 0.75L. That means that in a case of 6 bottles we have exactly one gallon of wine! Moreover, if we remember that the Bordeaux barrel is 225L, which is equivalent to 50 gallons, we have another convenient number: 300 bottles of 750 ml per barrel.

In Europe, in 1975 the measurements were standardised and in 2007, following the European directive, all wines must be bottled in one of the formats mentioned above. In the restaurant and retail trade, it is rare to see bottles larger than Double Magnum (3L), perhaps only for decorative purposes. Generally speaking, the larger the capacity of the bottle, the rarer it is to see them, as their production is very scarce. In the case of Champagnes and big Bordeaux, it is more common to see auctions of larger volumes than usual, as these formats are considered better for ensuring more progressive ageing of the wine, better preserving its fruit and offering extra freshness.

For the next barbecue in the garden, for the family Sunday lunch or for a dinner with friends, there is nothing better than large format bottles to enjoy your favourite wines in good company and in style. Perfect for special moments and celebrations.

At Vinissimus we have a wide range of formats to suit any event or circumstance. Don't miss out on the more than 350 wines in large formats that you'll find in our catalogue!